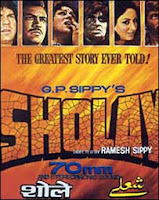 Amidst all the Cricket World Cup 2011 frenzy, I thought of watching movie 'Just Go With IT' starring Jennifer Aniston & Adam Sandler. The movie was good but within 10 minutes of the start of movie, I had 'I have seen this movie before' kind of feeling, the same feeling that you have when you watch those Hollywood inspired Bollywood movies. Yes this movie had a storyline similar to Salman Khan Starrer “Maine Pyaar Kyun Kiya”.
I was somehow happy that bollywood has managed to reach to a level where Hollywood is taking inspiration from our movies (it could also be a mere coincidence though). While returning back from the movie, I had a weird thought, What if a remake of Sholay was made in Hollywood ?, Who would be in the star cast, What would be the movie theme ? & some similar idiotic thoughts which I felt should share with you all :

Plot:
In Hollywood version of the movie, FBI agent's family is killed by Don named Gabriel, he decides to fight back and recruits two convicts, Jack and Victor. He approaches them in a Bangkok Jail and offers them to be part of secret mission, they agree to bring in Gabriel alive - for a hefty price. After getting discharged from jail they have some fun at Bangkok followed by an Item Number by Mallika Sherawat, and travel by Charter Plane to Rio, the Secret Agent lives there with his widowed daughter-in-law and a Robot. All three fight against one of the most elusive and dreaded Don of all times. In this hollywood version horses are replaced by sports bikes, Dhanno and the horse carriage is replaced by Ferrari and there is no coin coz its the age of Plastic Money :p
Some Dialogues :
Gabriel
Tucker
Jack
Victor
Imaam: Why is there a pin drop silence ?
Posted by Purvesh 23 comments: